Being British, I should be a master. But smalltalk has never been one of my strong points.  The only thing I can ever seem to come up with is the weather and I even struggle with that.  This is one of the reasons I love Switzerland, because here you don’t need to waste your time doing it!

For example, you can stand at the tram stop in Zürich without having to say a word to anyone.  No-one hovers next to your ear, waiting for you to lose your guard and look at them, so that they feel they have permission to engage in a meaningless conversation about how terrible it is that the bus is always late.  Obviously in Zürich the bus isn’t always late and I’m at the tram stop which is definitely not always late, but in the UK the buses (and trains) are often late.  So why do we even need to talk about it?

Smalltalk is awkward, full stop.  Sometimes though, it’s harder work to avoid it than to just give in and get through it.  Every made-up word of it.  And at work , it just can’t be avoided, in an Anglo-Saxon environment it’s a necessity of work life.  A huge part of my corporate job in the last ten years has been to meet lots of external people; which means ever-repeating that walk of doom from reception to meeting room.  It’s great if there’s something in common – then it isn’t smalltalk at all, it’s normal conversation; but bearing in mind the huge buildings I’ve had the pleasure of working in, it can be a nightmare.  Here’s a sample:

‘Great.  OK, X, you just need to swipe your card here and go through this door.  Follow me.’

Follows me.  Uncomfortable silence whilst we both think of small talk (X is not German mother tongue).

Oops …. shouldn’t be wishing I was outside when I’m at work.  Not good.  Must be more serious.

You get the picture.  That’s just a standard one.  The more confident smalltalkers will happily engage in the conversation themselves, leaving you to just answer difficult questions like ‘How long have you worked/lived here’ (a bit too personal for me), or ‘How many people work in this office’ (hmmmm, good question.  I’ve never been good at remembering numbers).

As well as making me seem rude or just stupid in my home country; my lack of smalltalk hasn’t done me any favours in the corporate world.  I’ve always been good at what I do, but don’t have that knack for self-promoting – which often can get you a lot further than actually working.

To that point, there’s something that tops all of my smalltalk fears – The Elevator Speech.  For those of you who haven’t heard of it (you’ve been saved), it’s a corporate term (such as singing from the same hymn sheet and being on the same page) for a two minute ‘speech’ to impress a leader or influential person, whilst by chance you’re stuck with them in a lift (elevator) between floors.  Sometimes that does actually happen.

Now considering how long I’ve worked in big organisations, I only heard of the ES (let’s abbreviate it, it’s smalltalk after all) three years ago.  At first I thought it was a joke, but alas, it is not.  Before I knew the ES had a name, I did the normal things in those awkward lift moments: pretend I am doing something I’m not or stare at the floor-number panel after quickly saying hello.  Actually, I still do those things as now I refuse to embark on a fake ES, but that’s irrelevant to this story.

Anyway, once educated in the ways of the ES, my then-boss set me the task of thinking of mine.  Hmmmm.  What would I say?  Do you need a different ES for different people?  Do you need to use long words to prove you’re intelligent?  Should you say something about the weather?  It was a mystery to me.

And it still is.  I envy my friends at work, that have their ES’s down to a tee.  It’s not that I’m unfamiliar with the business strategy – I find it very interesting, it’s why I work anywhere, really.  It’s not that I’m not working on great projects, I am and have been.  It’s just that as I don’t feel the need to talk to strangers at the tram stop,  I don’t feel the need to have to talk about myself to impress someone else.  In my eyes, the proof is in the pudding.

Naive, I may be.  Stupid, some might say.  But I’m happier without smalltalk.  Silence is a good thing, it gives you space to think, watch and learn.  Why ruin it?

If you have any great tips on how to make smalltalk whilst not feeling fake, I’d love to hear from you!  Please leave me a comment!

If you liked this post, hit like so I know which posts people like the most.  Then I can keep writing them.  You might also like Proud of my Frau – ness, The Problem with Prosecco or Tramtastic! Part Deux.  You can also follow me on Twitter: @lifeinzuri or for more on communications, take a look at me business blog ‘it’s all about the journey’.

One response to “Smalltalk!” 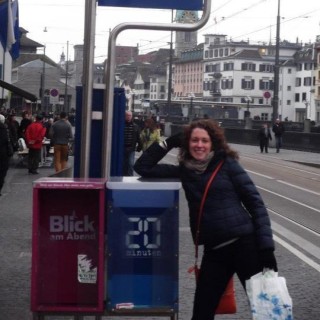 NewinZurich - Your Guide To Living in Zurich

Your Guide To Living in Zurich

Taking a new approach to communication...maybe